Threat from a Disease Source and Associated Risk Prediction

Threat refers to disease development factors at or very near the source; Risk refers to the potential spread and development at the source and along the forecast trajectory. Threat is related to weather conditions, disease level, and source area, which determine the source strength (level of spore production). It also includes the potential for transport to other growing areas (favorableness of overhead and nearby sky conditions). Risk refers to the danger of disease development to growing areas along the course of a trajectory (or trajectories, in the case of multiple sources). Table 1 below gives the three levels of source Threat and the associated Risk levels. The association is indicated by a shared boundary between a Threat and a Risk. Note that there is NOT a strict one-to-one relationship between categories of Threat and Risk. 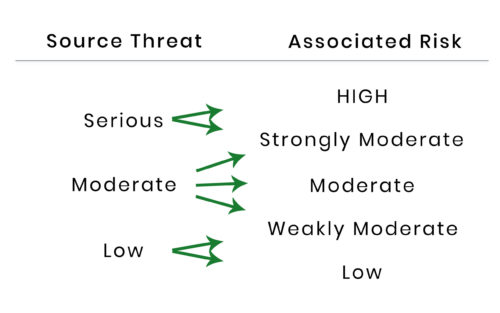 Threat describes a range of maximum risk values that may be possible for a given spore transport episode. For example, if a source is a Serious Threat, then some area along the forecast trajectory will have a Risk level of at least Strongly Moderate. A source of Moderate Threat will have a minimum Risk level of at least Weakly Moderate, but no more than Strongly Moderate. Conversely, if a source is classified as a Low Threat, that implies that no target area along the forecast trajectory will be at Moderate Risk (or greater).

How are the risk assessments formulated?

We start by assuming that risk of disease development can be divided into three simple categories:

These three categories are based on factors that are involved in the long-range transport and deposition of spores:

In most cases, there is ongoing sporulation at a disease source and conditions will be suitable for infection if (or when) spores are deposited at a target area. Thus, risk assessments are frequently determined by the potential for survivable transport and deposition of airborne spores. The direction of the trajectory is also quite important, obviously, because only exposed cucurbit fields are going to be at risk.

Spore survival is a difficult and inexact problem. Exposure to several hours of direct sunlight kills airborne spores. Cloud cover shields airborne spores and allows them to survive. These are the guidelines we use:

These breakdowns are the ones we use in the forecasts. Below is a list of the risk assessments, followed by a weather forecast that is typical for that risk assessment.